About the 1987 "Texas to Alaska Model T Adventure" 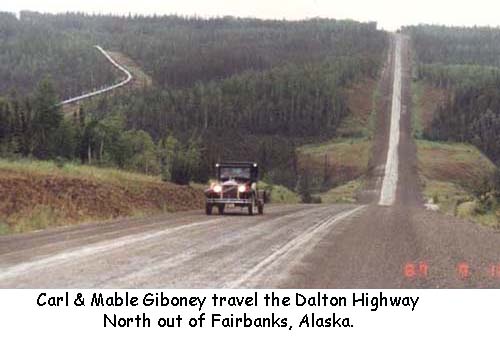 On June 12, 1987 a group of 8 Model T Fords left Bryan, Texas on the longest Model T tour ever held. Eight other Model T drivers joined the tour at various points along the route.

•• These participants made the entire round trip of 10,400 miles driving and an additional 1,000 miles on various ferry boats.

**The Johnson's Model T broke down before they ever joined the tour and they wound up driving their modern car to accompany the rest of the group. All 16 cars which joined the tour completed their drive.

There were no support vehicles taken on the trip. Of the eight Model T's who made the entire 10,400 mile trip from Bryan, Texas and return, four of the cars never had a flat tire. One of the cars had no breakdowns whatsoever, only having to change the oil.

Back to Alaska Tour Information Page